Lilliput is named in honour of Jonathan Swift. It is said that in 1726, while visiting Westmeath friends and enjoying the tranquil beauty of Lough Ennell, that the ideas for his well known book ‘Gulliver’s Travels’ were first conceived. Shortly after this publication the townland beside Lough Ennell known as Nure was renamed Lileput or Lilliput.

Lilliput House, as far as we know, was erected in the Eighteenth Century by a family named Hudson, a branch of the famous hotel keeping family.

At one stage, Lilliput House, standing on 60 acres became the property of the Boyd-Rochfort family of Midleton Park, which is about a mile and a half away towards Castletown Geoghegan. During this period, Lilliput and its grounds were a playground for the landed gentry, offering a base for boating, shooting and fishing.  The last care-taking tenants were the Leonard family.

In the late 1960’s the house and lands moved on to German property owners, who removed the roof and timber, in order to lower the rateable valuation of the land. After a short stay, the Germans sold the property onto Mullingar owners.

These new owners had plans for a commercial holiday resort, but the proposal was resisted by the general public, who were unhappy about the plans. Having had free access to the lake for generations, they wanted Lilliput park to remain a public amenity.

The development plans were turned down and the park was put on the market again and soon after purchased by a Galway farmer, who had little interest in the house. The years of neglect meant that by the late 80’s / early 90’s, Lilliput House had fallen into ruin.

At the start of the 1990’s locals took an interest in restoring Lilliput to it’s former glory. A newly formed Committee, ‘The Friends of Lilliput’, in conjunction with Westmeath Co. Council, bought the property. With the help of FAS they restored the house and developed the area as a public amenity.

The results of their efforts to date are clearly visible. Lilliput House is now the home of Lilliput Adventure Centre. The ‘Hill’ is now a fine 18 hole par 3 golf course.

The park also plays host to the Lilliput Sports Committee, who have been holding their annual Sports and Feis at the lake shore since the late 1920’s right through to the present day. The Sports, which was started by the Gaelic League, is now one of the longest running Sports’ in the country, still held annually on the 2nd last Sunday of June (it being the Sunday nearest the longest day of the year) and attracting an ever growing attendance. 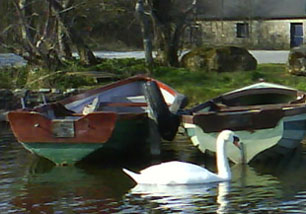 Want to make a booking or find out more information?